You are not connected. Please login or register

» More on the news of Batista's daughter's sex tape


Bill Behrens who coordinates independent bookings for several TNA stars including Shannon Moore recently noted on his podcast that TNA Wrestling have allowed Jeff Hardy to wrestle impaired on television in the past and it is an "open secret" that the World Champion is still using drugs. The shocking revaluation comes a week after Hardy was described as 'unfit to perform' going into the Final Resolution pay-per-view. TNA managements reportedly held crisis talks 20 minutes prior to the PPV going on air which would have had Hardy stripped of the TNA World Heavyweight Championship however the decision was made to allow him to wrestle and defeat Matt Morgan to retain the title.

Behrens discussed Hardy's chairshot to the back of Ken Anderson's head in October which left him with a severe concussion and wound. He said that Anderson is in a great position to sue the organization since he could claim Hardy was unfit to compete when he issued the negligent chairshot. TNA has since hastily banned unprotected chair shots to the head.
_________________

I don't have a problem with him doing drugs. But that would be a whole different argument; and quite frankly I don't want to start a flame war between all of us. So I'll leave that be.

When it comes down to wrestling intoxicated, then I've got a problem. Especially when it can severely endanger another human being's life. It's still a tad bit hypocritical of this guy, and anyone else who merely doesn't condone Hardy's "recreational habit", as I never saw anyone complain about Jake Roberts or Sandman wrestling drunk. Which is just as bad... it's merely because of the stigma on drugs that there's such a huge uproar, now.
_________________
If you like what you see, don't forget to buy it! Support the industry that you love. Without our money, wrestling wouldn't exist!

"I'm the best in the world at what I do, and there's only two things you can do about that; nothing, and like it!" - AJ Styles 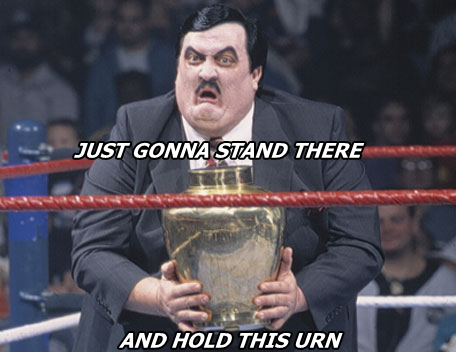 but it's alright, because Kane's flame still burns...